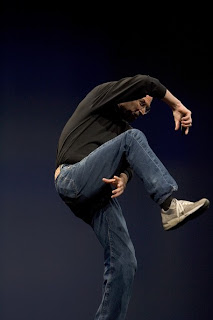 Today, the world mourns a tech legend, the one and only Steve Jobs.

The man behind the re-invention of the Macintosh brand, who brought a lowly second choice to a Windows style PC, into a massive must have computational instrument. His ideas were more than just 'another computer' they were works of art. A classy item to sit proudly on any desk.

Even though we understand that Steve did have many creative and highly talented people behind him, he himself, was just a pure magnet of energy, we always hung off every word at every press conference or event he held. It was just so exciting to see what he and his team had in store for us next.

For me personally, it began a long time ago, back when I was still in school, living in Tasmania, Australia. My dad and I were hardcore Atari Computer fans. We had an Atari 1040STe, an Atari 1040 Mega STe and also the final TOS based OS computer, the Medusa. We dabbled with PCs, but were always staunch Atari supporters until they folded entirely with the failure of the Jaguar game system. I knew a bit about the Macintosh, in Europe, the Macintosh and the Atari guys were good friends. I do believe there were talks of possible take overs from either side (maybe during Steve Jobs' absence, when Macs were failing) and a fusion of TOS and Mac OS was on the horizon, but never eventuated. My first real Mac temptation came from a friend, who's mother managed one of the few (maybe only) Mac authorised resellers in Hobart. They always had Macs in their home, and the she brought back an original Tangerine iBook, I was astonished and captivated by this sleekly shaped piece of art. I really racked my brain looking for the justification to attempt to co-erce my dad into a purchase. 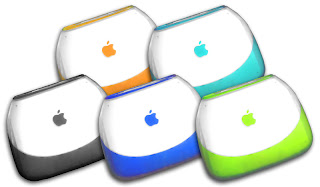 The iBook in it's many colours.

Sadly, the iBook purchase never happened. A similar feeling washed over me with the release of the PowerMac G4 Cube. That thing, truly was a work of art, it still is. It was stylistically well before it's time. My friend had the original Unreal Tournament playing on it and I was itching to have one for myself! Once again, it wasn't to be. 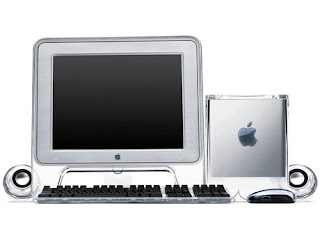 My actual first Mac purchase is what I'm blogging on right now. A 2007 MacBook Pro. It's in immaculate condition and I love it to bits. Along with my iPhone 3GS, I'm not as up to date as many other Mac fans, but I still love reading all about Apple's latest forays into the tech market place.

Steve, you will truly be missed by ALL tech nerds all over the world. God bless you, your family and all who worked for you in all the Apple shops and factories all over the world.
Posted by Keith at 9:52 PM
Email ThisBlogThis!Share to TwitterShare to FacebookShare to Pinterest
Labels: Apple, Atari, Atari 1040STe, iBook, Macintosh, Medusa, Mega STe, PowerMac G4 Cube, Steve Jobs